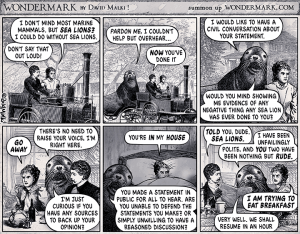 A sea lion is a person who enters a debate in bad faith with the intention of filibustering actual discourse.

When I appeared on Netroots Radio today, Will McLeod asked me a question about what “sea lioning” is. I answered that a sea lion was a person, usually on Twitter, who entered a conversation in bad faith and filibustered it with inquiries. But I don’t think I explained it effectively. Let me remediate that for you now, because a sea lion is both a curious and a very common thing, and it appears IRL as often as online.

1. A Sea Lion tends to invite himself.

A sea lion enters a discussion, objecting to some fundamental matter about the topic. An internet sea lion will typically demand you produce documentation of these claims, or spam you with propaganda links, like an article on breitbart.com or hour-long YouTube video. In climate change sea lions, this presents as the 5% of fringe experts who oppose what the other 95% of the scientific community has accepted as fact.

A sea lion never turns up to tell someone they’re doing things right. Even if you engage the sea lion on every point, he won’t be satisfied. A sea lion will demand you keep listening to them, as if their freedom of speech includes a guarantee of an audience. Their contribution to the conversation often resembles a tiresome filibuster, muddying the waters or end the discussion entirely.

3. A Sea Lion’s bark is worse than its bite.

Proper sea lions are often not educated about the issues they’re objecting about, and actually have only their gut reaction to support their side of the argument. In an effort to seem smart, sea lions sometimes mention cognitive biases, unaware of their very own cognitive bias due to incompetence (The Dunning-Kruger effect, if anyone’s interested.) A sea lion’s style is greater than it’s substance, using ten-dollar words without knowing the basic facts about the topic.

4. The Sea Lion’s goal is to end conversations.

Contrary to what the sealion says (and if we are charitable, intends) he is not there to promote free discussion. His interest in free speech consists precisely of his own, whereas that of others is threatening to a sea lion. If engaged he will exhaust those who speak with him, demanding their attention and time. An ignored sea lion expect you to countenance his ignorant, flawed “criticism”, as if public figures of any size are required to set things straight for people dumb as a post. Thus the conversation ends, derailed at the point when the sea lion entered it.

Sea lions do what they do because it works. They travel in packs, knowing that you might individually block one of them, intending to gang up on you and flood your notifications if you haven’t. Sea lions have in common with street harassers a tendency to target women they perceive as vulnerable. Put it to you this way: sea lions called me ‘cunt’ until I installed the #antiggblocklist. Now they bitch about my block list, saying I couldn’t accept their criticism.

The life of a sea lion must be a lonely one, for he surfs from discussion to discussion, looking for someone of his own size whom he can confront.