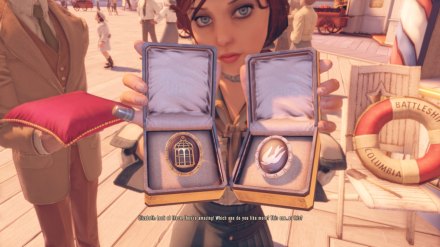 One of the few decisions you get to make that affects the gameplay of Bioshock Infinite, which of these symbolic textures Elizabeth will wear ’round her neck

Booker DeWitt is the last guy I want saving my daughter. For Christ’s sake, he scalped people at Wounded Knee because he didn’t like being called “the White Injun”. I wouldn’t want Booker DeWitt taking my nineteen year old daughter to register to vote, let alone deliver her unharmed to New York, even if the liqour ‘takes the edge off.’ Didn’t he sell his own daughter to pay off his gambling debts? I don’t care if he regretted it, what kind of louse sells his baby? What kind of louse buys someone’s baby? The answer in both cases is Booker DeWitt, the ‘protagonist’ of the popular year-old game Bioshock Infinite, which I’m reviewing today. I would say ‘spoiler alert’ but this game is eleven months old, and I’m sure if you love firearm-related video games you’ll love Bioshock anyway, and if you don’t, well I guess cheat your way through with Vigors, like I did when the game became difficult, about 50% of the way through.

At the outset, Booker DeWitt is a husk of a man, a pawn in another man’s/woman’s game, being helplessly guided by his minders (the ‘twins’ Rosalind and Robert) to the next phase of his ‘deliver the girl/wipe away the debt’ poetic cycle. It’s as if you’re Alice in Wonderland and these two British ginger people are your Chesire Cat, in fact, the game alludes to this own helpless reference for its protagonist more than once. Booker DeWitt is Alice, through the looking glass, tumbling down the rabbit hole. His characteristic motivation is guilt for a whole list of unspeakable transgressions he and the player barely remember, evolving out of his failure to have protected the women of his past, namely, his wife and daughter, which is the standard reason widowed protagonists in video games do anything. Booker can’t seem to remember how much he owes, or what he owes, or to whom, like an amnesiac Han Solo; because traipsing through different dimensions apparently unchains your memories and erases your moral scruples, if indeed the chronologically contiguous Booker ever had scruples. Booker can’t even remember who ‘AD’ is, though they were important enough to warrant scarifying into his hand with what looks like a miniature cattle brand. Once your adventure gets properly under way, and you take off to the floating city of Columbia, Booker DeWitt gets a skyhook and immediately bludgeons a police officer to death with it; because DeWitt is all about mature themes. Nothing escapes the rain of blood portended by Booker DeWitt; he is Odysseus, Elizabeth, Athena, for by the wiles of DeWitt did the mighty sky-city of Columbia fall. Sing, Muse, of the wrath of Booker DeWitt and his repeating gun.

This deadbeat you play is integral to the story as both its grizzled anti-hero and it’s oppressive, paternalistic antagonist, that is to say, both of these characters are Booker DeWitt. This is where reviewing Bioshock gets a little tricky, but rest assured that there is no iteration of Booker DeWitt that can save Elizabeth from himself; no course of action can be taken which doesn’t result in Elizabeth having to willingly to sacrifice her freedom (which wasn’t that the point?) for your life, get tortured and indoctrinated by the bizarro you, and aged and abused face you years later while you lamely tell the spinster princess you really did mean to save her (unless you count dimensions where you fail and she dies.) For a game that speaks to the depth of infinity and invokes the breadth of time travel, the narrative possibilities of Bioshock Infinite are incredibly singular and deterministic. Why don’t the women of Bioshock just ditch this Typhoid Mary protagonist?

And yes, there are four strong female characters (though I don’t imagine this game passes the Bechdel Test): Elizabeth, her mom, Lady Comstock, Rosalind Lutece, and the anarchist Daisy Fitzroy. Elizabeth and Rosalind/Robert are both characters with a power well beyond anything Booker can comprehend; Rosalind can exist anywhere and everywhere (And also as Robert, her dimensional ‘twin’); Elizabeth can open tears into different dimensions. Daisy Fitzroy is the charismatic leader of a violent Socalist revolution called the Vox Populi, who orient themselves against the robber-baron industrialist Founder class. There might be some modern political commentary there, but it’s kind of subtle, like a tablespoon of wasabi. Apparently studying all that Bible didn’t do the alternate version of Booker DeWitt much good; in that life you actually killed your wife, instead of just having her die in childbirth in your proximity, to protect an increasingly weird premise that no one can know your daughter was adopted (regardless of the particulars, when you see the apartments he keeps Elizabeth in, I had to think; Comstock had to be like the Daddy Warbucks to Booker’s Herbie.) And when I stop to consider that Booker couldn’t even start his quest without Rosalind & Robert bringing him into the right dimension to do so, the whole purpose of Booker as anything other than a vehicle of destruction eludes me, for me, his heroism fades as the bodies pile up, as the game exacts its wretched spectacle. It seems like Elizabeth and Rosalind could have gotten her back into Booker’s dimension without his help.

Booker DeWitt is every trope of protecting women by violence taken to its logical, self-destructive endpoint; wherein the arms you secured to protect the damsel are the ones she’s speared by.  Booker DeWitt is one of those male characters who needs a damsel like Elizabeth to care about and want to protect to find his own redeeming qualities; without her he’s the thorny, aggressive, ‘conflicted and intense’ guy, swept up in the stormy sea of his self-made problems; luckily game designers succeeded in making Elizabeth an appealing and engaging adventure companion, without whom you cannot complete the game. She also changes outfits several times, suggesting Booker never washes his clothes. Booker DeWitt is no good for the population of the cities in Columbia, whose complexity and additions of interiors like restaurants, bars, shops, amusement arcades, public transport and stuff like banks inevitably allude to; if there are banks, there must be depositors; but the majority of these venues are empty except for enemies (typically law enforcement, weird steampunk arcani fighters, or robots with machine guns who look like George Washington.) It’s implied that the residents are evacuated, or in hiding, but am I the only one who feels conflicted about Booker’s role in their destruction? I mean everything seemed to be going great in Columbia until Booker DeWitt showed up.

The plurality of dimensions in Bioshock Infinite can’t even redeem Booker; it seems every decision he makes or doesn’t make spins him off into a new, worse self. The Booker DeWitt who got himself baptized after The Battle of Wounded Knee eventually becomes the aged, maniacal Father Comstock, who, desperate for a related heir and sterile (from all the transdimensional rifting) purchases his infant daughter from the Booker DeWitt who did not get baptized, as he’s desperate enough (from actual gambling debts?) to sell her. Still other Bookers linger in the transdimensional lurch, including a rogue Booker who scalps Founders for shock value (until he dies for the cause of the Vox Populi), and a shattered Booker who managed to decapitate his infant daughter on the edge of a Lutece tear while attempting to buy/sell her.  (In the ordinary timeline, the infant loses a pinky finger instead.)

Dear readers, do you think I am being too harsh with Mr. DeWitt? Or with his character designers? After all, doesn’t Bioshock also have Elizabeth and Rosalind, both strong female characters in their own right? Aren’t there half a hundred Booker Dewitts out there in other games, calling themselves Dante or Desmond or Blake or Snake or Kratos? Is it fair, criticizing the industry for its most venable archetypes, indeed, why go to the steakhouse if I can’t stand the blood? After all, it’s just a game, you think, not for real; the anonymous legion of 18-to-24 year olds don’t really nourish a fantasy of being like Booker DeWitt; they just identify with him enough to play as him for the entirety of Bioshock Infinite, which is about a hundred to one hundred and twenty hours long. That’s only like an entire workweek of being Booker DeWitt; a drop in the bucket for the video game careerist.

So Happy Valentine’s Day, Booker DeWitt, you inglorious bastard, you, and may exploding zeppelins be ever at your back, and the sun shine warmly upon your razed, abandoned cities.