I’m a reader of Savage Love. You should be too. Dan has an active commenter base, whose purpose (so to speak) is to provide additional and/or secondary advice to the people who write in. Now, most of these commenters are rational, wise, compassionate people from a variety of ages backgrounds. I’m not going to quote their kind and thoughtful posts.

No, instead, we’re going to have a look at the MRAs of Savage Love, whose asshole advice doesn’t quite spoil the soup, but gives it a distinct shit-taste.

So without further ado, let’s present our first letter. DOMME, a mature (38ish) woman is married to a “Type A Professional” pushing 60, with whom (she says in the comments) she has co-founded a company. To summarize (the letter is long) DOMME’s husband is “disinterested in her pleasure”, believes “A married man ‘should not have to pleasure himself.'”, and whose sexual style the letter-writer describes as ‘rapey.’ Her issue stems from this winner’s aversion to providing her oral sex (or even letting her initiate.); and DOMME’s own interest in having a submissive partner who will provide her with oral sex. 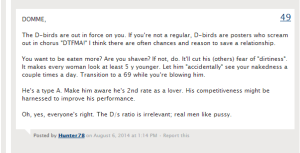 “You want to be eaten more? Are you shaven?”

Ah, yes. Rather than dump this asshole (perhaps during the Clinton administration), Hunter78 thinks the real issue is how bushy DOMME’s cunt is. If only she would shave, Hunter78 laments, then her husband would lick her ’til dawn. Because a woman is always to blame.

According to Hunter78, the longer a woman stays in an unhappy marriage, the less licence she has to ever leave. And anyone who advises her otherwise is a “D-Bird.” He also feels very strongly that the thing this marriage needs isn’t counseling or a divorce lawyer, but a Brazilian Wax.

“I don’t have any hard data, but I do have high expectation that shaved women get eaten more than unshaved.”

This brings me to MRA #2, a delightful fellow by the name of seandr.

“The only thing hair does is get in the way.”

As much as I hate to say it, seandr’s right; hair does get in the way. And it gets in the way for a damn good reason: it helps keep dirt and dust from elsewhere out of the vagina, like eyelashes do for your eyes.

I doubt these men have ever kept their pubes shaved for an extended period of time. I have, and I can say from experience it hurts. To shave your pubis is a fucking production, more so than shaving the legs, armpits, or even the face. The contours of a woman’s labia are not suited to the razor, so cuts are an inevitability. So too are the razor bumps.

But seandr’s not a total douchebag, see? After a backlash from the thread, seandr went on to mansplain:

“Look, all of the unshaven pussies out there are truly lovely. I’m married to a woman of Jewish and Mediterranean descent, however…”

Many MRAs are quick to note that they have wives/husbands. I say: pics or it didn’t happen. Apparently seandr never told his wife about trimmers, either.

Some time later, DOMME writes in to answer some questions, notable among which are the fact that her and her husband are co-founders of a certain business; which complicates the option of divorcing him. But of course Hunter78 has another, more profound question:

What? What?! Seriously, how is that relevant?! This feminist demands an answer!

According to Hunter78, the purpose of feminism is to defend a woman’s right to keep her bush looking like Bob Marley’s hair. Please tell me more about this “feminism”, Hunter! 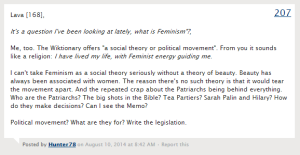 “Who are the Patriarchs?” A: Not Hilary Clinton, dumbass.

In Hunter78’s world view, feminism is a conspiratorial religion between us girls, so we can blame nonexistent patriarchs for our problems, much like other conspiracy theorists would blame “The Jews” or “The Illuminati.” Nor does feminism do anything in Hunter78’s imagination; much like the actual Men’s Rights Movement, it’s just an excuse for us ladies to stitch & bitch. He waxes on (and on) about how “feminism has no theory of beauty”, as if only ugly women “believe” in feminism.

Don’t believe me? Let’s read it from him: 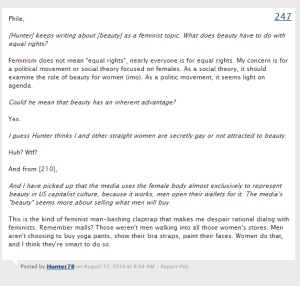 “This is the kind of feminist man-bashing claptrap that makes me despair rational dialog with feminists. Remember malls?”

This is why Hunter78 is an MRA. He honestly believes that because women dress the way women usually do, they are somehow choosing to be the sex objects his mind makes them out to be.

Also note the term “painted faces”. Not only is our beauty something we ladies choose to flaunt and taunt Hunter78 with, but his rhetoric suggests that women who wear make-up use it like a mask; that women’s beauty is a falsehood we deliberately use to manipulate jerks like him.

This lost cause has some other gems, in older letters (including an amusing blow-up about his thoughts on sexual harassment laws) but since I don’t want to word-wall my readers like Hunter will, I think I’ll cover those in another post, perhaps over the weekend.

I’ll leave you with one of those weird moments of MRA clarity, from our friend seandr:

Me too, seandr. me fucking too.