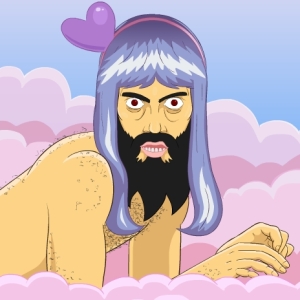 Roosh V: Not fooling anybody

As of Saturday, Roosh Valizadeh’s 4-country tour has been ridden out of Montreal on a rail. First, there was the change.org petition to deny him entry into Canada, which has nearly 40,000 signatures. Then, his hotel cancelled on him, and Roosh scrambled to find a new venue. Even the Mayor of Montreal tweeted that he wanted Roosh V out of Canada. Talk about a tough crowd: for Roosh, this amount of resistance was unprecedented.

Although Roosh successfully hosted his 1-hour speech about the state of man, twice as many people gathered to protest against Roosh at a second location in Montreal. Only about 40 guys attended the talk. Later that day, Roosh saw local Canadian television reporting about the protests. But the talk behind him, Roosh decided he could “enjoy our victory lap”, and do what he does best: the Canadian pick-up scene.

So Roosh V. posted a victory video, where he can be seen drinking alcohol. He “enjoyed [his] victory lap.” Then he put on a wig and hit the bars of Montreal.

Roosh worked his game, the pick-up game which (he claims) has gotten him hundreds of bangs in his lifetime. Roosh V worked the game which is really a philosophy of rape, a brand of rape tourism guides. Roosh V was working the game that he made his brand. This game was not for beginners, like Roosh had done in New York: he had just one other guy to serve as his wingman. But it didn’t work. Late Saturday night, some bitch in Montreal fucking recognized him.

And she threw her beer on him, and so did another woman. Roosh V took off his wig as one woman yelled at him:

“Fuck you!” Another woman shrilled.

The women in the bar continued: “This is the guy who says rape should be legal!” “This is the guy who wants to rape your sister! This is fuckin’ Roosh V., he thinks rape should be legal.” Within 48 seconds, Roosh had been bounced from the bar, his turf, his watering hole, his hunting ground. The self described “innovative Casanova” was denied access to the social scene he must capitalize on. At least two dozen people followed Roosh out the door, heckled him down the street and to the entrance of his hotel.

Roosh and his wingman retreated to the hotel, located only a few blocks from the bar they’d staked out that night. Behind the security of the glass door, Roosh gave the jeering crowd which, moments before, had been his game, the middle finger. The crowd fingered Roosh back, and one of the women said “Eat my cunt!”

It had taken just two minutes and thirty-three seconds to shut down Roosh’s game in Montreal for good.