Edit: Turns out the condo which Cernovich listed as his contact address for all your lawyerin’ needs is actually his home. In the interest of protecting him from being torn apart by roving packs of SJWs, I’ve removed the photo of it which I originally included in this article.

Nearly three months after Eron Gjoni kicked off the poorly organized hate mob known as #gamergate, the battle rages on. Two other high-profile women in the gaming industry have been driven from their homes as a result of #gamergate-mediated harassment; experiments I performed Sunday on Twitter during a train ride north have shown the Animu Avatar Brigade to be alive and kicking.

But #Gamergate hasn’t moved on from harassing Zoe Quinn, lady game dev; even as Quinn takes legal action to be left the fuck alone & in peace. Her embittered ex, Eron Gjoni (who’s been featured in this space four times now) is largely sidelined due to the gag order, but someone else has taken his place: semi-professional lawyer and full-time Peter Fox facsimile Mike Cernovich. Today, I’m going to examine the relationship between Cernovich, Gjoni, and #GamerGate in order to build a dossier about this Internet lawyer guy. 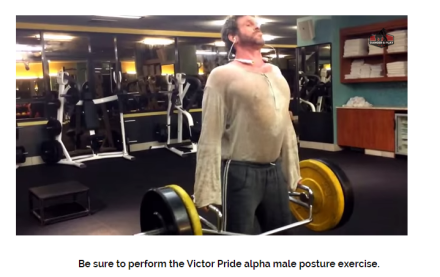 Mike Cernovich in his natural environment (Source: @PlayDangerously via YouTube)

This heavy-liftin’, ‘roid-raging, “alpha male posturing” Venice, CA attorney evidently doesn’t have enough clients to pay the bills, so he makes his daily bread by selling “fitness juice” to gullible idiots who want to raise their testosterone points to over 9000. I say he’s doing this to make ends meet because Cernovich’s contact address on avvo.com is the third unit in a four-unit condo; and it belongs to someone else. (Edit: Turns out it’s Cernovich’s current residence; probably a rental. – ID.)

He recieved his licence to practice law in 2013, and has suspended operations “for the year” to focus on his current website. Given the arithmetic it would seem he’s actively practiced law for either one year, or not at all post graduation.

Cernovich has been blogging about men’s rights issues and bodybuilding since he was in law school. On that blog, Crime and Federalism, Cernovich talks about Roosh V. at length, and of how he preserves his youth with testosterone injections (obtained by a doctor’s RX, though “90%” won’t prescribe it, Cernovich writes.) He hasn’t really written about legal anything since 2012; when I found this posting about a much more established & successful lady lawyer. In it Cernovich describes her professional life in graphically sexual terms; so that this “almost intimidating figure” is reduced to a prostitute metaphorically.

“Did she insist that, as a Florida lawyer, she could be not sued in New York?…No. She knelt down on her knees, and gave Rakofsky a virtual blow job.” – Mike Cernovich

I can’t imagine why the courts don’t take this lawyer seriously. He also claims to have been “falsely accused of rape” in his website bio and to have defended the charges in court. His Twitter acct covers charming topics, like how to get away with murder, or how rape w/o force is not rape; he then donates to charities so as to seem like a nice guy.

Cernovich seems to be selling these #GamerGaters on his law degree to get a ticket to internet fame; or infamy. He even stated outright he hasn’t any interest in gaming or video games per se; the only shared interest between Cernovich and #Gamergate in general is a reactionary hatred of anything “SJW”.

But for the fact that #GamerGate is a trendy topic/ wannabe army of NEETs (like in Eden of the East) Cernovich probably wouldn’t want anything with them. #GamerGaters as I’ve spoken to them seem like the kind of folks who Cernovich would mock for being weak lazy betas; #Gamergaters seem to like anime, video games, and Vivian James; not bodybuilding and anabolic steroid (ab)use.

According to Cernovich, his “past is full of nonsense”; he’s “moving forward” from the statements he made as recently as August; although he has “No Remorse.” Pay no attention to the man behind the curtain, Gamergaters; Mike Cernovich is a real actual lawyer with a degree and he knows his shit! His legal inexperience and Social Darwinst ideas about crime should be a selling point; this is a man who can see the issue from all sides. Even a rapist’s side, because he was accused of that once. Call him for every restraining order you find filed against you in California. Eron Gjoni certainly seems to be in contact with him; he even said “they’d share a beer” should he go to MA.

Cernovich claims to have in his possession a police report filed by Quinn, and posted a sliver of a court document around midnight of Oct 19. Zoe Quinn contacted me yesterday morning about the document and confirmed its authenticity. Cernovich has tweeted that he wouldn’t post dox, although he totally could and says it would be legal. But if I were Quinn I would take that as a warning.

But how did Cernovich know which court to check for these records? I searched for the same information on Oct 1 and came up with nil; and none of the average Joes in #GG knew anything more at that time either; this wasn’t common knowledge. The whole reason I started covering this was because Gjoni seemed to be raising money for a phantom purpose. Even after Eron’s anonymous friend posted an eyewitness account on Reddit, the court has only ever been identified as being in Massachusetts someplace. I asked Cernovich how he figured this out on Twitter, but he did not respond to my inquiry.

Cernovich has two things working for him here help him to violate Zoe Quinn’s privacy. Firstly, these are public documents; albeit obscure ones which cost money to obtain. Second is that he’s not the accused party here, he’s an attorney; albeit an inexperienced and out-of-practice one. His First Amendment rights argument is incorrect I think; Gjoni’s right to freedom of expression is limited here because it infringes on Quinn’s right to live her life without being pilloried, threatened, harassed, libelled, and driven from her home. It’s called incitement; and if Gjoni “tried” to draw an appropriate line w/r/t how much is too much in his writings, he missed it by a country mile with thezoepost. And in defending Gjoni like this on Twitter, Cernovich is harassing Zoe Quinn himself.

More on Cernovich as he continues to chest-thump on the internet, the “testosterone replacement therapy” working on him so he’ll be the human equivalent of a silverback gorilla, which he’s taken on as an emblem for his current website. Did you know that gorillas have really tiny penises (3 cm)? It’s true. It makes me wonder if Cernovich himself is compensating for something.