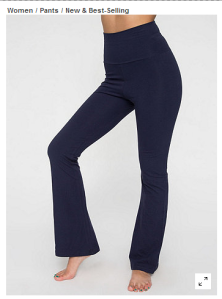 Pants model strategically showing off that sweet, round ass.

Howdy boys and grrrrls. It’s time again for “MRAs of Savage Love”! Tonight, we’re going to hear more from “Hunter78”, whom I featured prominently in my inaugural post in this series.

Usually, I would use this space to introduce the Savage Love Letter on which our delightful, retrograde guests will be giving their advice; but today, I don’t have to. As you’ll see, the comments I’ll feature today actually have nothing at all to do with the letters. Instead, I’ll share with you the comment from auntie_grizelda (a righteous lady with excellent advice) that started this whole mess.

“I could live in my yogas 24/7.” – auntie_grizelda, unwittingly changing the subject to feminism.

What was that, you say? yogas? Could she possibly mean… yoga pants?!

Yep! After a long day of dealing with her business, auntie_grizelda likes nothing better than the comfortable, flexible, but defining embrace of yoga pants. She’ll even wear them out of the house! Or to her broker’s office! And she doesn’t even do yoga! Watch out, world; auntie griz is wearing the pants now!

But Hunter78 is unhappy with this development. For one; there’s way too much positive attention being paid to another longtime commenter, her personal life, and her fashion sense: and for another, no one’s paying attention to him and the faptastic thing he wrote on the finer points of deep throating. After being ignored for three whole posts, he writes:

“Comfort they say. Women’s clothes are always about attractiveness…” – Hunter78, telling women why they wear clothes.

Poor Hunter. He must have had to wear a lot of women’s clothing to come to that conclusion. Probably not as much as auntie griz, or LavaGirl, or even myself; but he wore enough of it to know that women’s clothes are always about attractiveness, even if you’re wearing athletic wear. But even a short, sexy sundress doesn’t get Hunter the attention he wants! We go another forty comments before LavaGirl even acknowledges him, saying:

And Hunter78, my my- quite the fashion man. Sundresses, hey?
Spaghetti straps or slightly thicker? Looking forward to your week in review..

So Hunter rolls out the big guns: apparently yoga pants are a symbol of wymyn’s victory in “the war”.

Hunter78, reminiscing about how women used to be.

His quote is risible, so I’m going to quote it in its entirety, and bold the parts I think you should really laugh at.

Spaghetti straps. Yeah, of course. The charm of spaghetti straps is they’re so flimsy. The man is tempted to pull off her top, but all sense argues against that. If a bra is worn, of course the bra straps will show, which are even more interesting.

Hunter78 makes it sound like he spends his summers staring at random women in spaghetti straps, getting boners from the visual stimulation. Also, he makes it sound like it’s the women’s fault for wearing these clothes in front of him, and not his for staring like a horndog at bare shoulders and clothed butts. He waxes nostalgic, to the days of yore; back when yoga pant technology was known only to a few wise yogis high in the Himalaya.

Unfortunately I can remember when a woman who inadvertently showed her bra straps would be mortified, borrow some safety pins, repair to the rest room and put travel restriction on the errant breast suspenders.Women’s underwear was only seen in the boudoir and the advertising supplements of the NYT. Nowadays the coquettish display of bra straps is welcome at all casual occasions, only formal events, business suits and weddings still hold out.

It’s all related to women’s making themselves attractive to men. And how they won the war.

Ew. “Breast suspenders?” Was that what bras were called, back in the days of “boudoirs” and print advertising? You know, back when women never left the house unless they were dressed like Edith Wharton? (Her 1901 house has a boudoir.) Apparently a modern woman’s work-out clothes are, to Hunter78, a “coquettish display.”

Translation: In the world of Hunter78, any woman wearing yoga pants is automatically flirting with him. (That’s what the word “coquette” means; a lady flirt.)

The commenter nocutename has the right idea. She asks:

So we women get more freedom and less absurd constraints, the brassiere industry can charge more for bras that are meant to be at least partially seen, and men getting the visual payoff you appear to appreciate. I’d call that a win/win (or win/win/win)

Why is everything a war with you, with battles to be won and lost?

The closest thing we get to an answer is Hunter78’s insanely long, opposite-day summary of the thread. He does this every thread; usually it’s not very quotable, since he’s digesting a bunch of stuff other people said. But of the matter of the yoga pants, Hunter78 writes: 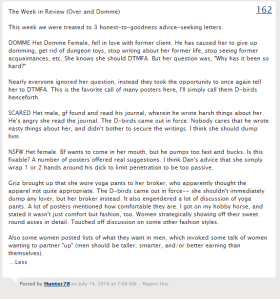 “I got on my hobby horse, and stated it wasn’t just comfort but fashion, too. Women strategically showing off their sweet round asses in detail.” – Hunter78, and his stupid hobby

By his own admission, airing his retrograde ideas on Savage Love is Hunter78’s “hobby horse”. And women don’t wear yoga pants because they’re comfortable, or because they’re going to do some yoga, but to “strategically show off their sweet round asses in detail.”

It’s not even a complete sentence. But I think it speaks to what Hunter78 gets out of this discussion; a chance to objectify women who write in, be pig-ignorant, and get attention for it. It’s risible, especially because I get the sense that Hunter78 probably knows better than to talk about “sweet round asses” and “coquettish display[s] of bra straps” in front of anyone he talks to IRL.